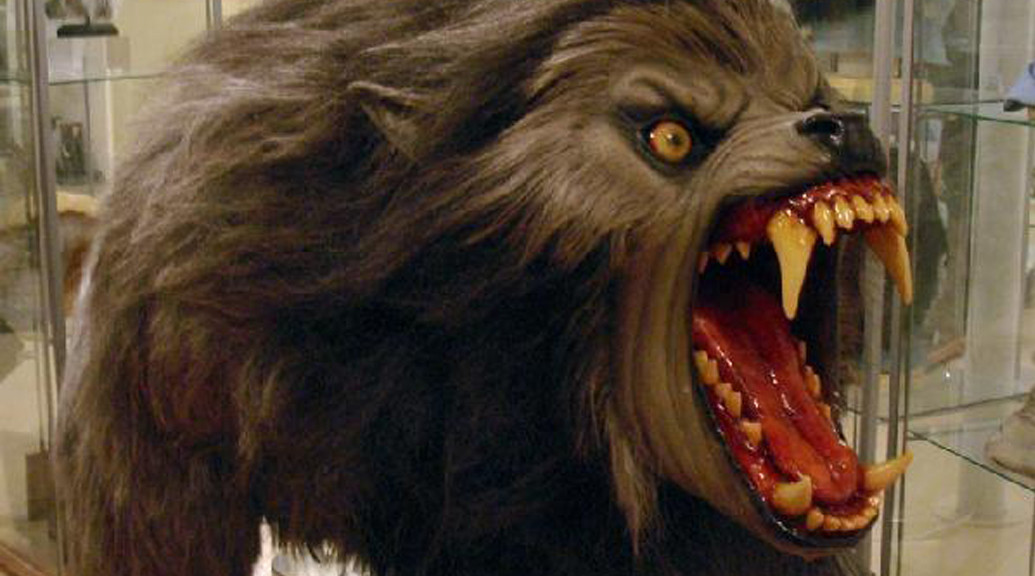 If you’ve read this blog post then you know Joe Rogan was crazy enough to give me a spot at The Moore when he rolled into town with Greg Fitzsimmons a few months ago.

I’d like to say I earned it, but the truth is -I once saved Rogan’s life in a freak whaling accident and he has been working off a life debt to me ever since that fateful day.

That’s because we’re all living in Joe Rogan’s world, people. Joe Rogan is the type of guy who wakes up in the morning and thinks to himself, “I think I’ll buy a life sized replica of a freakin’ werewolf today” before texting some dude named, “Voodoo Chicken” and asking him if he wants to crash a sold out comedy gig.

When I arrived at Rogan’s hotel room, he was beaming with joy while looking at pictures of his latest purchase -a life sized replica of the werewolf from “An American Werewolf in London”. That’s right, Casa de Rogan now has one of these bad boys roaming around somewhere. I’m guessing in the kids room.

While we were admiring the online photographs and discussing the many obvious benefits and advantages to having a life sized replica of a werewolf in your house, Sam Tripoli came through the door and told Joe the club wanted to know what song they should use for his “walk-out” music.

Of course, I instantly suggested the great Madonna classic “Papa Don’t Preach” and I was dead serious about this. In fact, not only was I serious about this… and I swear I am not making this up -Rogan, Tripoli and myself all spontaneously launched into what can only be described as a very masculine and totally not gay rendition of the song… and we knew every word. All three of us.

I am not ashamed.

We headed over to Bellevue where our driver dumped us like a sack of unwanted kittens behind a dumpster in the Washington Square Mall parking lot. Apparently, there was supposed to be some sort of special VIP entrance back there, but when it appeared our driver might have to actually exit the vehicle to find it -he simply said, “Here we are!” and then waited in awkward silence until the rest of decided to crawl out of the vehicle and fend for ourselves.

Normally, this should not have been a problem because I have been to The Parlor many times. However, unbeknownst to me and without my approval -some maniac or rogue organization has decided that the month of December would be an excellent time to fill the streets, sidewalks and generally all available spaces with drummers, jugglers, ten foot tall walking nutcrackers, elves, fake snow and just about everything obnoxious that has anything at all to do with Christmas.

Words cannot describe the madness… as we rounded the corner I began having vivid LSD flashbacks while Rogan managed to stammer, “Uh… is it always like this…?”

The funny thing is, I have wandered the streets with Rogan on a few different occasions and typically you can’t go further than ten feet before some drug crazed lunatic comes charging out of the shadows screaming, “UFC!!!!!” or “DMT!!!!” or some other three letter acronym. But this was probably the only place on earth where Joe Rogan could walk the streets completely unnoticed amidst the swirling candy cane chaos that came crashing down all around us. I honestly thought I would turn around at some point only to see that Joe and Sam had been completely engulfed by this madness, only to be found days later living off the remants of discarded holiday fruit baskets that now littered the streets.

Once we finally found our way inside and back to the green room, the manager wasted no time in making introductions.

Joe politely shook his hand and then said, “First thing -where can we smoke some weed?”

You know, I’ve been to a lot of comedy clubs and I’ve hung out with a lot of comics. It’s pretty much just assumed that smoking pot is one of those things that’s going to happen sooner or later if you exercise poor enough judgement to actually invite a comic into your home or place of business -but I’ve worked with the manager of this club before and I always got the impression that he ran a “clean” club -so this might explain why he suddenly had a look on his face like Joe had just asked for naked pictures of his mom.

The manager politely deferred to Big Irish Jay who happened to be standing by and is the house comic/MC. Jay led us outside to the balcony while the manager shrugged and said, “Oh well… I guess at least it’s legal now, right?” while we puffed away above the holiday madness spilling out into the streets below.

In fact, on that very day recreational marijuana had become legal in Washington state and we wasted no time in testing the boundaries of this wonderful new legislation with a joint so potent -I suddenly understood what all those ABC after school specials were actually about and what a terrible person I am.

Once we had confirmed that you can smoke weed in public in the city of Seattle, Sam and Rogan returned to the green room for deep pre-show meditations while I wandered the halls desperately trying to think of something funny to say… preferrably something ten minutes long.

Apparently while I was wandering the building in a fugue state, Sam was asking Big Jay if he thought Bellevue was the type of crowd that might freak out of he got a little edgy with material about race.

Jay told him he should be fine as long as he didn’t say the dreaded, “N” word and this was actually pretty good advice… advice that I clearly did not hear because 30 minutes later I was on stage doing a bit where I say, “drug crazed nigger faggots” at least three times in under two minutes.

My buddy Jonny managed to get footage of this little faux paus on his cell phone.

Fortunately, I managed to actually get a laugh out of this nonsense and when I returned to the green room -Sam was completely freaking out.

“They told me to stay away from that stuff, man! I have a bit that would have killed!”

For a second, I think he even suspected we intentionally punked him -but honestly, maybe I’m banned from The Parlor by now, so who really got punked here?

Of course after my set, Rogan strolled on out there and completely destroyed the place for well over an hour without even breaking a sweat.

As usual, Rogan hung around and shook hands with every single random nutjob who wandered in off of the streets that night before retiring to the adjacent pool hall.

You may not know this about Rogan, but he is some kind of amateur pool shark. Apparently, he spent a lot of time in shady pool halls out in Boston when he was still an amateur comic and he’s even one of those creepy pool guys who has his own collapsable cue that he carries around in a special little case and stuff… his cue probably even has a name… a girl’s name… anyway, you may have not known that about Rogan -but I suspect The Parlor did because surprise, surprise, who should happen to be hanging out in the VIP pool lounge that night but some semi-pro female pool shark.

She even had… and I swear I am not making this up -a giant bag of deer meat for Rogan.

Let me tell you something, you give Rogan a giant bag of meat, rack ‘em up and then say “break” and it is on.

Even though I strongly advised him against accepting a giant bag of meat from a total stranger that maniac was in heaven and there was nothing we could do. From that moment forward, Sam, myself and my buddy Jonny were slaves to that woman’s cue and the spell it held over Rogan. I’m not really complaining though because the pints of Guinness were free and I’m pretty sure I drank at least 46 of them that night in between Sam, Jonny and myself ducking outside to make sure the marijuana legalization laws were still in effect.

Eventually, I think it was discovered that I had drank roughly $3,000.00 worth of Guinness though because I suddenly found myself being whisked away to downtown Seattle whereupon Joe stuffed a fistful of UFC tickets into my pocket and then made his way to his hotel room presumably to feast on raw deer meat while staring at pictures of his newly acquired life sized replica of a werewolf.

I ended up sleeping in Jonny’s basement that night with a giant dog named, “Outlaw”… good times.